Eutrophication and it's increasing damaging effects in Marine Life

Eutrophication is the “excessive richness of nutrients in a lake or other body of water, frequently due to runoff from the land, which causes a dense growth of plant life and death of animal life from lack of oxygen”. The main issue with eutrophication is that it heavily affects many, large bodies of water, including Lake Winnipeg. Excessive amounts of turquoise algae bloom is caused by extremely high levels of phosphate and nitrogen caused by surface runoff. Many fish rely on a healthy amount of algae to feed off of, but excessive amounts of algae has terminated many freshwater ecosystems, killing of various species of fish and endangering many more. Fishermen are unable to fish during conditions where the algae have become too thick. The massive amounts of algae in Lake Winnipeg is affecting not only fish, but humans and their livestock as well. “The Lake Winnipeg algae blooms are considered the worst algae problem of any large freshwater lake in the world.”

Below is an image defining the effects of eutrophication more clearly. 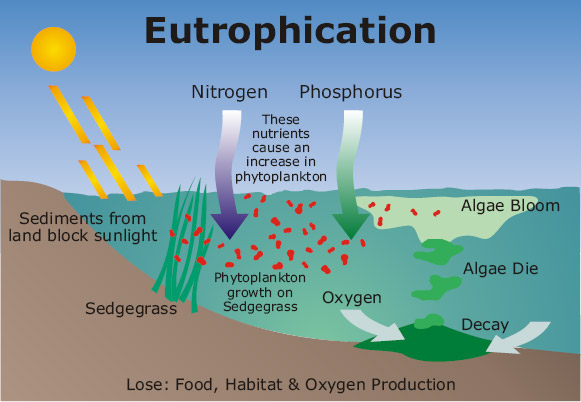 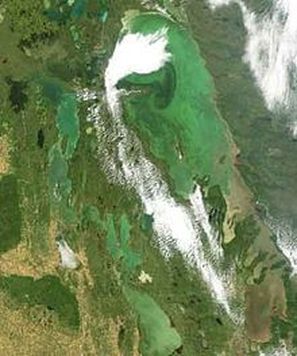 To the left is an image of the harsh and terrible conditions of the excessive amounts of algae which has turned the Lake Winnipeg positively green.

Eutrophication and it's horrifying affect on biodiversity

The impact of Eutrophication in marine ecosystems is steadily killing off various species of aquatic life. Common species of fish (such as the Blue Tilapia and the Suckermouth Catfish) are dying off due to the increased amounts of algae, and the effects of oxygen depletion caused by decomposing algae. In lakes which are affected heavily by eutrophication, the algae and the plant life eventually dies off, settles to the bottom of the lake, and decomposes. When aquatic plant life die, the oxygen is pulled from the body of water, and is then used in the decaying process of the dead species. During decomposition, the organisms that break down the plants, use up all of the remaining oxygen left at the bottom of the lake.
“When dissolved oxygen levels decline to hypoxic levels, fish and other marine animals suffocate. As a result, creatures such as fish, shrimp, and especially immobile bottom dwellers die off.” Certain species of fish are killed due to the oxygen depletion, and this heavily affects the bodies of water’s biodiversity.
Many species of fish often relocate and travel far to other large bodies of water. This can affect the new and old bodies of water because these new species of fish have become invasive species. If some of these invasive species were strong, and predatory, the new body of water would suffer because many of the fish would die as sources of food for the new fish. This would result in new fish developing in the new lake, and would also decrease some of the species of fish that had already made mad that body of water their territory. Eutrophication is always tied back down to how it affects evolution. The evolution of these fish would be put to a halt because the harsh algae conditions will be killing off the fish, which makes their breeding capabilities minuscule. 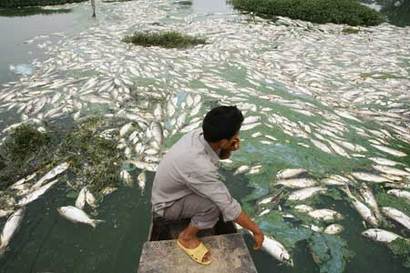 Thousands of fish lay dead. The increased amounts of algae and water pollution has wiped out the entire territory of fish inhabiting that area.
Species of fish that have hybridized, and adapted in order to survive the harsh conditions of Eutrophication

It has been found by scientists that species of whitefish have hybridized themselves to extinction in Europe's Alpine Lakes. The increased amount of algae concentration has turned the waters a thick murky hue, which has made the species distinctive bright colour redundant, which led to their hybridization.

Eutrophication and its affect on Allele Frequency

"Human-induced eutrophication is indirectly affecting aquatic organisms by altering their environment. This brings on altered selective pressures and could thereby cause changes in the genetic composition of exposed populations. Since anthropogenic environmental changes are usually occurring at a much higher rate than naturally occurring changes, they force populations to adapt to the new conditions
faster than normal."
Eutrophication is also affecting the evolution of these species of fish that are affected of the algae. The fish that are dying are creating a vast change in the gene pool that limits diversity. Eutrophication could easily be considered as the bottleneck effect form of genetic drift. As the oxygen content in the water decrease, te fish are unable to survive, and therefore die off. This heavily affects the process of evolution, as some species may become very limited in population. 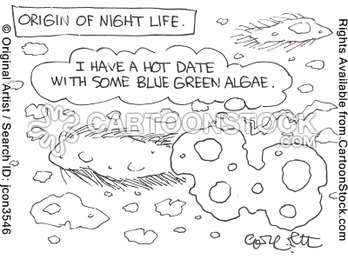 A few comics to help truly visualize the harmful effects of Eutrophication. 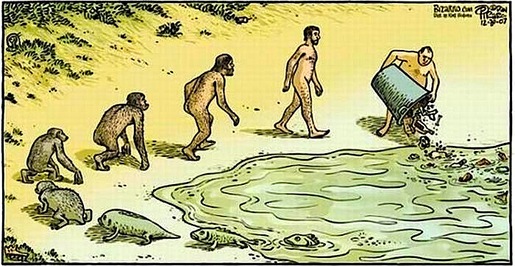 Here is a link to an informative video describing the effects of eutrophication, and it's impact on a certain population of fish in Lake Eerie: https://www.youtube.com/watch?v=ioauvcggbFc
Eutrophication  is severely affecting many of our common marine ecosystems, and it can easily alter the evolution and speciation of the fish, and aquatic life forms living there.
A few sources used in this website: website: http://en.wikipedia.org/wiki/Lake_Winnipeg_algae_threat http://en.wikipedia.org/wiki/Eutrophication#Decreased_biodiversity